As a computer enthusiast, I have tried out Linux many times over the years. I’ve tried Mandrake, Corel, Ubuntu, Mint, Arch and a few others. I was never able to stay in Linux very long, though, so I always ended up just going back to Windows. For the past year, I’ve been running Ubuntu on my work computer, but ran Windows in VM,  so I would be able to do AutoCAD work. I also started running Ubuntu on my laptop. All that said, I never got super comfortable in Ubuntu.

When I got my new laptop for my classes, it came with Windows 8. I developed a program for PDF file creation for a roller derby tournament that I was Tournament Head Referee for. My desktop development skills are limited to VB.NET, so I left Windows 8 on there for the tournament. As soon as I came back, I set up the laptop to dual boot with Ubuntu 13.04. I have been basically living in it since and have grown to absolutely love it. There are still some things that I think could be easier, but I’m learning.

One of my recent discoveries that has helped me enjoy Ubuntu even more is one that has been a part of Linux distros for as long as I can remember. It’s also one that I have always thought was just plain dumb. That feature is workspaces. Workspaces had always served to do nothing other than create confusing situations. I would occasionally not be able to find a program that I had open, because I had somehow managed to open it in another workspace. I’ve recently realized that my confusion was only because I was never actually using workspaces.

I had always been under the impression that multiple workspaces was the poor man’s multiple monitors. What I had never heard anyone say specifically is what workspaces do that multiple monitors can’t. Applications in one workspace don’t show up in the Alt+Tab list on another workspace. That means being able to have applications running all the time that can be accessed quickly (Ctrl+Alt+arrow keys), while not cluttering up your Alt+Tab list.

Here’s how I’m using it: I operate most everything in workspace 1, but have two terminal applications that I am running constantly. One terminal window watches for updates to Haml files and does the conversion to HTML automatically and another does the same for Sass files. Those make it difficult to select a terminal window in my main workspace, so I have them on workspace 2. I also have my IRC client running on workspace 3. That allows me to access those applications very quickly and keep my main working environment clean.

In some ways that is even better than multiple monitors. 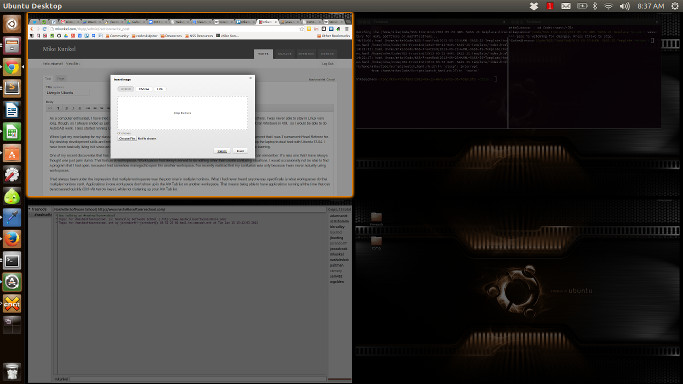